With this, the fourteenth issue of the IRTG ‘Between Spaces’ Newsletter, we would like to inform you about our news and current events.

Also the Mexican part of the IRTG has chosen a new group of scholarship holders. One of them arrived recently at Berlin:

Marco completed his bachelor’s in Communication Sciences at the Universidad Nacional Autónoma de México and his master’s in Social Sciences at the Universidad Autónoma Metropolitana. Since 2010, he has been a doctoral student in Sociology at El Colegio de México. His research project is entitled “¡Si nos tocan a unx, nos tocan a todxs! Un estudio sociológico sobre la solidaridad neozapatista: 1994-2011.”

We would like to cordially welcome all the new members of the IRTG and we look forward to working with them!

On November 13, 2012, Manuel Antonio Solís, professor of Sociology at the Universidad de Costa Rica, held a lecture entitled ‘La investigación empírica de la subjetividad en el caso de procesos sociales y políticos’. The talk departed from the idea that the inhabitants of Costa Rica are still trying to cope today with the deep emotional scars left by the sudden and short eruption of violence in the summer of 1948. Difficult questions concerning individuals’ efforts to come to terms with the memory of this period of social strife have largely been ignored due to the existence of a dominant political discourse that stresses the country’s peaceful and democratic development. Nonetheless, the differences and hate that separated communities, neighbourhoods and even families came with significant costs in human suffering that are not captured in the number of casualties of this so-called historical accident. Solís explored these costs by means of the medical records of the Hospital Nacional Psiquiátrico, a little used corpus of sources. While carefully pointing out the shortcomings of this particular kind of document, he argued that the observations recorded by the hospital’s doctors and psychiatrists offer revealing insights into the fears, bouts of anger and psychoses that tormented persons who were directly or indirectly affected by the violence. In addition, he noted that the observations demonstrate an intimate interaction between the socio-political space and that of the hospital itself, with a movement of people and ideas affecting both the patients and those that diagnosed them.

Bernd Hausberger, professor of History at the Colegio de México and member of the IRTG in Mexico, presented the fascinating comedy-adventure film Viva Maria! (1965), starring Brigitte Bardot and Jeanne Moreau and directed by Louis Malle. The film tells of the adventure of two women who get involved in an early 20th century revolution in a fictitious Central American country called San Miguel. The objective of the workshop was to show how the Mexican Revolution was indirectly portrayed through the introduction of certain topoi, while linking it with representational practices of gender and culture. The discussion that followed dealt with the question of how this film, designed primarily as a non-political parody, gave space to critical debates about revolution, sexuality, and gender in the global context of the contested 1960s. What also became clear during the discussion was the importance of social, political, and cultural contextuality regarding the perception of films. 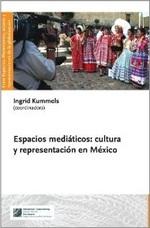 In this publication of the International Research Training Group ‘Between Spaces. Movements, Actors and Representations of Globalisation’ anthropologists, historians, curators, photographers, and filmmakers observe and investigate the medial spaces that have been part of far-reaching social and cultural processes of the twentieth and twenty-first centuries. With a broad media concept as its point of departure, the focus is placed on the production, spread, and interpretation of these spaces. The themes treated in this volume center on the auditory and visual culture in post-revolutionary schools and intercity buses; on portrait photos in which women from the elite class wear indigenous Tehuana clothing; on exotic wrestling in Tijuana; on the production of films involving the collaboration of both indigenous and nonindigenous directors. Who is able to express oneself through these productions? How do the protagonists of these productions position themselves within the area of tension between the “ethnic groups,” the “region” and the “state” in Mexico and beyond its borders? How do the actors create “between spaces” by means of medial representations that make it possible for them to position themselves outside of oversimplified dichotomies and rigid hierarchies? How did the available categories of power and difference alter categories of gender, ethnicity, and nation? And do such spaces produce new cultural and social relations? These questions form the basis for identifying new spaces that have been created by the actors through the use of media in the historical and contemporary phases of globalization.

On the whole, I enjoyed my stay in Germany very much. In Mexico, the seminars of the International Research Group ‘Between Spaces. Movements, Actors and Representations of Globalisation’ took place every two weeks. The intimate setting of the sessions distinguished them from other academic seminars. Furthermore, I think that this is an important reason why the collaboration is able to be fruitful, especially from a Mexican perspective.

In Germany, by contrast, the seminars are organized once a week. As a fellow, I can say that this structure and the personal contact over one and half months helped me to understand the mind-set and work methods of the project’s collaborators. Beyond this, I was able to develop very close ties with the professors and to get to know other fellows.

I particularly appreciated that I was welcomed into the project by my colleagues and always well treated. I think that I was successfully integrated into the structure of the project and that my involvement was respected on both a personal level and as a student. This also meant, however, that I had many responsibilities. Compared to Mexico, interactions in Germany are more formal. I suppose that this is due to the general attitude of the Germans toward their studies. As a result, it is possible to work very productively and to learn a lot here. I was especially able to exchange ideas with other students in the colloquium and at the presentations and to benefit from their own personal experiences.

Programme of the Interinstitutional Colloquium

For more information on our programme and activities, please consult our website: www.entre-espacios.de.