With this, the seventeenth issue of the IRTG ‘Between Spaces’ Newsletter, we would like to inform you about our news and current events.

Relocation of the IRTG ‘Between Spaces’ – new address

The IRTG ‘Between Spaces’ has moved into new rooms in the Boltzmannstraße. Our new address is Boltzmannstraße 4, 14195 Berlin. The telephone numbers remain the same.
By moving, the IRTG has gained more space. The new offices are in the midst of the campus of the Freie Universität Berlin, near the Henry Ford Building, the University Library and the vegetarian cafeteria. The building of desiguALdades, which is also part of the Institute for Latin American Studies, is just across the street. The IRTG’s new rooms find themselves in a historically significant building; here in the Boltzmannstraße 4 was the first enrolment office of Freie Universität Berlin, where the first students matriculated after the university’s founding in 1948.
We look forward to welcoming you soon in our new location!

We would like to welcome Adriana von Mitschke-Collande as a new student assistant at the coordination office. Her work will be to support the office’s activities concerning the programme and the preparations of this year’s summer school. Adriana studied Romance Literature and Languages at the Freie Universität Berlin and is currently working on her master at the Humboldt-Universität zu Berlin.

The following doctoral and master’s students of the Mexican section of the IRTG have recently arrived in Berlin:

There are other doctoral students who have been selected as scholarship holders from the Mexican section of the IRTG and who will soon be coming to Berlin to join the German section:

We cordially welcome all the new members of the IRTG and look forward to working with them!

On March 6, the third Interinstitutional Colloquium of 2014 took place at El Colegio de México.
For this session we invited Dieter Ingenschay, professor at the Humboldt-Universität zu Berlin and also a member of the International Research Training Group, to give a lecture on his current research project.

In this session the doctoral students Nino Vallen and Fernando dos Santos Baldraia Sousa, both from the Freie Universität Berlin, presented their current research projects.

Nino spoke on ‘Andrés Dorantes de Carranza and the Mapping of the Social Order of the “Lands Between Asia and Europe”’. It was commented on by Bernd Hausberger (El Colegio de México).

Fernando presented his project ‘Time of “Between Spaces”: the Black Atlantic in the recent Brazilian Historiography of Slavery’, which was again commented on by Bernd Hausberger (El Colegio de México).

Both research projects, albeit very special topics, were followed by a lively discussion about space and time as categories of analysis and response from all participants.

In this session the doctoral students Katharina Farys from the Freie Universität Berlin and Yoer Castaño from El Colegio de México presented their current research projects.

Both research projects stimulated a lively discussion amongst all participants about space and the relation between the social micro-level and globalization.

April 22, 2014, Visit of the President of the DFG Peter Strohschneider to the IRTG in Mexico

On April 22, DFG president Peter Strohschneider visited the International Research Training Group ‘Between Spaces’ at El Colegio de México. He was accompanied by a delegation of members of the DFG (German Research Foundation), including Jörg Schneider, head of the division for international affairs, Dietrich Halm, director of the DFG office responsible for Latin America in São Paulo, Cornelia Huelsz from the same office and Christina Siebe, DFG liaison scientist in Mexico.

The DFG delegation was received with a short presentation of the IRTG in Mexico: Carlos Alba briefly introduced the structure of the programme and its main achievements. This was followed by a more personal evaluation of the programme by Ricardo Pérez Montfort and the presentations of two students, who have already completed their doctorate: Marcela Suárez and Montserrat Algarabel. The presentations led to a lively discussion with the DFG members about concepts of space and in-between and interdisciplinarity.

After lunch a small group of members of the IRTG accompanied the DFG delegation to downtown Mexico City to give Peter Strohschneider and his delegation an impression of some of Mexico’s most interesting places. After visiting an impressive Maya exhibition at the Palacio Nacional, the group walked through downtown streets to the Plaza Garibaldi to get to know Mariachi music and real Mexican tequila. The day ended with a dinner at the Hotel Majestic, which affords its visitors an extraordinary view of the Mexican Zócalo and the Cathedral.

The visit of the DFG president and his delegation proved an excellent opportunity for the IRTG to present its people and work and to exchange ideas and experiences in open and confidential surroundings.

On May 8, the last session of the Interinstitutional Colloquium during this semester took place at the Instituto de Investigaciones Sociales, UNAM.

Both presentations were followed by a lively discussion amongst all participants about representations and gender.

On May 9, the first summer term session of the Interdisciplinary Colloquium ‘Entre Espacios: proyectos y estudios’ was held at the Institute for Latin American Studies in Berlin. This time, we had the pleasure of welcoming three Mexican scholarship holders who recently arrived in Berlin: Bruno Miranda (UNAM), Selen Arango (UNAM) and María Valeria Montoya García (El Colegio de México).

The first presentation, ‘Academic Transfer of Knowledge in the Global Jesuit Network – University Accessibility and Social Stratification of the Students of the University of Córdoba’, was given by Javier Francisco, who just returned from his research stay in Argentine. He especially explored the scope and limits of archive documents for the reconstruction of students’ social backgrounds.

Raúl Nivón Ramírez, Mexican scholarship holder from the Colegio de México, then presented his project ‘La transmisión de los XIX Juegos Olímpicos’. He focused on the final structure of his thesis and the impact of one of the first Olympic Games, which had a broad resonance in the global media, especially through television.

After the lunch break we continued with the presentation of María Valeria Montoya García, also a Mexican scholarship holder, who spoke on her nearly finished thesis on ‘Los hogares en la crisis. Trabajo y condiciones de la vida en México, 2008-2010’. She set forth the consequences of the financial crisis of 2008/2009 for the economic situation of the households in Mexico City.

There were lively discussions of all the presentations by the participants, especially on methodological questions of research.

This workshop originated in two conversations held between postdoctoral and doctoral fellows in January 2014. The idea was to receive input on specific and practical proposals about workshops that they would benefit from. It was decided that it would be useful to learn methodologies used in disciplines other than their own; in this way fellows could gain insight into other ways of conducting research that could be included in their own work.

The content of the workshop itself was of high quality. Professors Helena Flam (Universität Leipzig) and Debora Gerstenberger (FU Berlin) provided deep insights into their respective fields.

Debora Gerstenberger offered an overview of how history is being redefined through a focus on globalization. By providing a wide range of readings, she gave fellows the opportunity to discuss how a focus on the global is seen from different point of views, ranging from those that argue globalization per se does not fully exist, to the other end of the spectrum where the ‘global’ is seen to be with us on a daily basis. At the same time, Debora Gerstenberger gave an introduction to the positive aspects of taking a longer view for non-historians and those interested in incorporating this discipline into their own work.

It is difficult to introduce and succinctly explain research methodologies in a three-hour workshop, but Helena Flam succeeded in doing so while working within the framework that fellows said they were interested in – interviews. She provided an overview, ranging from research design to the ‘dos’ and ‘don’ts’ of conducting types of interviews. Interview types covered were autobiographical/narrative interviews, open-ended interviews, focus groups and expert interviews. She tailored her workshop to the specific concerns of each fellow present in order better to give an idea of how to continue with his or her research.

Altogether, the workshop had its intended effect. It afforded an introduction to different points of view and focused on working in an interdisciplinary format. 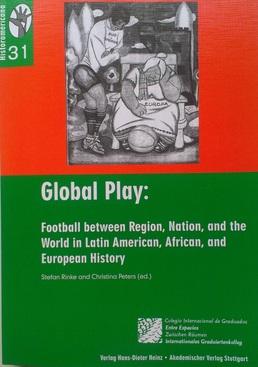 Football is much more than physical exercise or a recreational pleasure. It has become an enormous economic factor that transforms ways of life. The sport is one of the most effective means of trans-border mobilization in our time. Football is more than just a game to be played and more than a product to be consumed; it is also a source of identity and inspiration, even in artistic and literary production.

Tutors’ Day at the IRTG

On September 2-5, 2014, all members of the IRTG of Mexico and Germany will meet together with interested scholars in Berlin to discuss projects and the programme of the IRTG. For further details, please visit our website.

From September 9 to 13, 2014, the 17th World Conference of the AHILA, the Asociación de Historiadores Latinoamericanistas Europeos, organized by the International Research Training Group, will take place at the Freie Universität Berlin. The theme of the conference is the motto of the IRTG: ‘Entre Espacios: La historia latinoamericana en el contexto global’. Several hundred historians from around the world are expected, who will discuss various aspects of Latin American history in over 100 symposia. The conference will be accompanied by an interesting and attractive supporting programme. For further information, please visit our website.

For more information on our programme and activities, please visit our website: www.entre-espacios.de

Ingrid Simson and the IRTG team