With this, the twelfth issue of the IRTG ‘Between Spaces’ Newsletter, we would like to inform you about our news and current events.

We would like to inform you about our current Call for Applications:

We kindly ask you to distribute the Call for Applications and inform interested students. There will be Calls for Applications for scholarships also from UNAM and CIESAS. Those will be published on our website during the coming days.

The Call for Applications from the Berlin/Potsdam side of the IRTG for 12 scholarships has been extended until July 15!

Staff of the Coordination Office will be absent during the coming vacation period:

Office hours of the Coordination Office during the coming months:

Besides, there will be no regular office hours of the Coordination Office during the summer period. For further appointments please contact us per email.

We are very pleased to welcome the following new member of our Research Training Group:

Mariana Coronel has been awarded a scholarship for further qualification. She works on aspects of the work of Robert Lehmann-Nitsche and the importance of popular culture for Argentinean intellectuals at the turn of the last century. 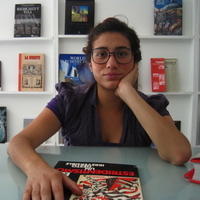 We would like to cordially welcome our new member of the IRTG and look forward to working with her!

“Entre-ensayos“ – ‘between essays‘ – was the keyword of the workshop offered by Liliana Weinberg, professor of the Centro de Investigaciones sobre América Latina y el Caribe of the UNAM, on April 12. The topic of the workshop was dedicated to Latin American essay writing, presented by three concise examples.

By means of a comparative perspective, Weinberg analysed essays written by José Carlos Mariátegui, Ezequiel Martínez Estrada and Fernando Ortíz and thus, by a series of quotations, demonstrated that the genre of the essay – underestimated in many cases – can be considered a “place between spaces“: Marked by a consciously subjective pull of the author, the essay reconstructs and discusses questions of social and transnational relevance.

On April 26, 2012, PhD students and postdoctoral fellows alike had the opportunity to participate in Paul Talcott's academic writing workshop ‘Academic Writing: The Dissertation’. During this one-day workshop we discussed writing techniques and organizational strategies that proved to be helpful for the dissertation process as well as for other pieces of academic writing. By doing so, we reflected not only on different ways to organize and present our argumentation but also on multiple ways to consider other scholar's contributions to our fields of research without getting lost in citation. In a nutshell, the workshop provided us with useful tools for the writing process along with a space to discuss our individual work flows that we very much appreciated.

This year’s gathering of the members of the Latin America Studies Association (LASA) took place in the city of cable cars, the Golden Gate Bridge and, of course, Chinatown. Located directly on the shores of the North Pacific, San Francisco has functioned from the days of its foundations until our own times as a gateway through which people, goods and ideas travelled between the Americas and Asia. It is, therefore, hard to imagine a more appropriate background for a panel that treated precisely those relationships. Scheduled on the early Saturday morning after the “Gran Baile,” the session drew a surprisingly good turnout, as such visualising the rapidly increasing interest in Asia that was noticeable throughout the event.

What this public saw were five presentations that not only covered a timespan of no less than half a millennium, but that also approached the panel’s covering theme from a wide variety of perspectives. First, Nino Vallen analysed the role of knowledge of the Pacific World in the formation of new spatial representations of New Spain during the sixteenth and seventeenth century. Subsequently, Mariano Bonialian discussed the significance of the circulation of Asian products in the Americas during the colonial period. Closing the historical part, Ursula Prutsch talked about the transnational experiences of Japanese immigrants in Brazil and the United States during World War II. Ximena Alba presented a comparative study of transnational enclaves of Chinese migrants in Paris and Mexico, while focussing on their community resources as well as social insertion. Carlos Alba and Marianne Braig, finally, provided insights into their ongoing study of ambulant traders in Mexico City’s Tepito and their role in the construction of new trans-regional spaces between Asia and America. There remained to José Carlos Aguiar the challenging task to summarise these works and to provide them with some comments.

All in all, this second meeting of people from or associated with the CIG that are involved in research into the interactions within the Pacific world, nicely presented the programme’s multidisciplinary and actor-orientated approach to a particular part of the historical process of Latin America’s globalisation.

Antonio Ibarra presented ‘Making a New World. Founding Capitalism in the Bajío and Spanish North America’, written by John Tutino. Ibarra described Tutino as 'historian of macro magnitudes' who tries to write economic history of the region during the period of 1550 to 1770 emphasising especially the importance of the silver mines as link for global trading between America, Europe and Asia.

All participants of the Colloquium discussed together the presented studies. Especially the relevance of the influence of global economy onto the local developments at the Bajío led to controversial discussions.

June 2, 2012, Long Night of the Sciences at the Latin American Institute: ‘Latin America - Between Spaces’

This year’s Long Night of the Sciences took place on June 2, and this year the Institute has taken the IRTG’s motto as its own: ‘Latin America – Between Spaces’.  The International Research Training Group offered its visitors an informative and enjoyable journey to a series of border crossings, translations and representations of cultural imaginations between space and time. The majority of contributions this time was presented by members of the IRTG. Sven Kirschlager’s  ‘Narcocorridos – the Soundtrack of the Mexican Drug Dealing‘, the exposition with fotographs by Tabea Huth 'A Wood on Travel‘ and Carlos Pérez‘ presentation on 'Drug War in Mexico‘ found great interest of the audience. Marius Haberland and Maria Lidola were the members of the IRTG who took part in the panel discussion on 'Latin America – Between Spaces‘, together with experts Alexis Passadakis and Harald Neuber, a discussion which informed a highly interested audience about hitherto neglected aspects of globalisation and international linkage in past and present. Laura Aguirre, Marcela Suárez, Marius Haberland and Thilo Papacek presented information about their research projects in a poster session and exhibition.  Highly favoured again, like already last year, was the crash course Maya with Yan Geoffroy who provided insights into this rather arcane language. Postdoctoral researchers of the IRTG Stephanie Fleischmann and Cecilia Tossounian organised screenings of a series of short films directed by young Latin American filmmakers and video artists. Tapas, Spanish wine and tango were other indispensible parts of another Long Night at the Institute for Latin American Studies.

This international workshop, which gathered 15 scholars from Europe and the United States, aimed to create a bridge between postcolonial studies and Latin American historical trajectories, acknowledging that ever since the penetration of postcolonial studies in the social sciences and humanities, a widespread unease or outright confusion has reigned as to how to insert (or not) the historical experience of Latin America into postcolonial paradigms. The result was a series of highly interesting presentations which, by taking Latin America as an instructive testing ground, challenged the West/rest dichotomy, a dichotomy that many historians identified with postcolonial theory, after all, have themselves sought to question.

The full programme of the Interdisciplinary Colloquium is also available here.

Workshop with Erika Fischer-Lichte (FU Berlin): ‘Problems of Cultural Comparison Using the Example of Two Productions of the Bacchae of the 90s’

For those interested in participating in the workshop, we kindly ask to register with entre-espacios@lai.fu-berlin.de

The lecture will be followed by the annual summer fête of the IRTG in the patio of the Institute.

All members and friends of the IRTG are invited and welcome!

The full programme of theworkshop is also available here.

For those interested in participating in the workshop, we kindly ask to register with entre-espacios@lai.fu-berlin.de

Participation of the International Research Training Group ‘Between Spaces’ at ICA 2012!

The IRTG ‘Between Spaces’ will participate with two symposia at the coming International Congress of Americanists, July 15-20, 2012, at Viena.

Symposium 948 ‘Movements and Actors Between Spaces: Aspects of globalization from a Latin American Perspective’

Symposium 951 ‘Between Spaces: Representations of globalisation’

The programme is also available here.

We would like to meet and celebrate the years of common work of the IRTG. Therefore we would like to invite all alumni, former scholarship holders and other members of the IRTG for lunch at the Office of the IRTG in Mexico at the Fundación Cardoza y Aragón on August 21, 2012. Please confirm your participation with saranda@zedat.fu-berlin.de .

For more information on our programme and activities, please consult our website: www.entre-espacios.de