With this, the thirteenth issue of the IRTG ‘Between Spaces’ Newsletter, we would like to inform you about our news and current events.

We would like to thank Valentin Tritschler, who has been working for the IRTG as a student assistant, for his good work, commitment and engagement. He has now decided to pursue other plans, which will take him first to Italy. We wish him all the best for the future.

We would like to welcome Robert Lüdtke as the new student assistant in our Coordination Office. Robert is studying for a Masters in Interdisciplinary Latin America Studies at the Institute for Latin American Studies of Freie Universität Berlin. We are pleased to have Robert as a member of our team and look forward to working with him.

Office hours of the Coordination Office in the coming months:

July 5, 2012, Workshop: Erika Fischer-Lichte (FU Berlin), 'Problems of Cultural Comparison Using the Example of Two Productions of the Bacchae of the 90s'

On July 5, 2012, we had the pleasure of taking part in a workshop offered by Prof. Dr. Erika Fischer-Lichte about the problems of cultural comparison, focusing on two productions of Euripides’ Bacchae in the 90s: Zé Celso’s As Bacantes (1996) and Tadashi Suzuki’s Dionysus (1990).

In her extremely interesting lecture Prof. Dr. Fischer-Lichte pointed out that the international success of both the Brazilian and the Japanese adaptations cannot be explained simply by reference to cultural specifics, but rather only also by a productive encounter of cultures. In general, it is essential to question the meaning of a comparison of cultures, since cultures undergo constant transformation, especially in the age of globalisation.

In the second part of the workshop, three of the participants had the opportunity to present their ongoing research projects in a more personal atmosphere, thus enabling them to benefit from Prof. Dr. Fischer-Lichte’s specialist knowledge and scholarly acumen.

The workshop was an excellent opportunity to test their interpretative skills for all the participants and offered stimulating discussions and inspiration for further research.

Does the Mexican revolution have a significant place in the Mexican political system, or are we living in the shadow of a process that disappeared years ago? This was the underlying question of the keynote lecture by Javier Garciadiego, the president of El Colegio de México. Garciadiego, one of the most important historians in Latin America, refrained from giving a single answer to the question, and instead suggested several possible ways of interpreting the singular process called revolution and its continuing consequences.

After this stimulating lecture, all those present were invited to the central courtyard of the Institute to enjoy the traditional IRTG summer reception. There, amidst music and delicious refreshments, it was possible to talk in a more informal way about Garciadiego’s address.

The workshop gathered scholars from the IRTG and an avid public looking for a clear diagnosis of the current political situation in Mexico. Individual talks were given by Alberto Aziz, Ilán Bizberg, Lorenza Villa-Lever, Carlos Alba, Stephanie Schütze, Günther Maihold, Sabina Morales and Carlos A. Pérez Ricart.

Although the obvious focus was the current election in Mexico (Alberto Aziz), almost all presentations were combined with a sharp analysis of the international context in which Mexico participates. They made clear that what has traditionally been considered as an exclusively internal affair (the elections) is now rather to be understood as a dynamic process existing between spaces. Special topics were touched upon with particular emphasis: the issue of education by Lorenza Villa-Lever and that of migration by Stephanie Schütze.

Marianne Braig, who ended the workshop with a concluding talk, praised the fact that it was possible to discuss Mexico without focusing exclusively on the security issue, a restraint that hinders debates about the country around the world.

16 and 17 July 2012, Panel discussions of the International Research Training Group ‘Inter-Spaces’ at the 54th International Congress of Americanists (ICA) in Vienna

The International Research Training Group ‘Inter-Spaces’ presented itself at two panel discussions during the 54th International Congress of Americanists (ICA) in Vienna, one of the largest conferences on American subjects, which takes place every three years alternately in America and Europe. On July 16th members of the IRTG from Berlin and Mexico met in a social science panel discussion with members of other institutions interested in the theme of ‘Movimientos y actores Entre Espacios: Aspectos de globalización desde una perspectiva latinoamericana’, and on July 17th in a cultural science panel discussion on ‘Entre Espacios: Representaciones de globalización’.

Both discussions offered a variety of interesting aspects on research about Latin American globalisation and inter-spaces, subjects that are becoming increasingly visible in this field. The mixture of established scholars and young researchers, of IRTG members and representatives of other institutions in Mexico, Berlin and other parts of the world, proved highly successful. The IRTG could thus present relevant aspects of its work to a broader scholarly public, learn of new perspectives through discussions and continue to expand its target network in the academic world. The success of the two days of discussion was attested to not least by the social gathering on the evening of July 17th at Café Roth, which was unusually well attended and again brought together all those associated with the IRTG who are interested in globalisation in Latin America.

On 21 August 2012, the IRTG invited alumni to a meeting in the offices of the IRTG in Mexico. Guests included Mexican and German professors and many former scholarship holders of the IRTG, who exchanged memories of their stays in Germany. 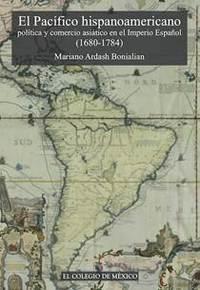 ‘The centrality of the marginal’ is an expression used by Mariano Bonialian to summarize the acquired role and attractive force of the Hispanic American Pacific on the geopolitical and commercial world map. If Spain saw the Pacific as a marginal boundary of its empire, for New Spain and Peru this area became a historical entity with a logic and inner force of its own, which determined the great geo-historical, transatlantic axis of the Spanish empire into the first half of the eighteenth century. Bonialian’s book sets forth the reasons for re-thinking the Bourbon reforms of the second half of the eighteenth century.

Further information on the book may be found here.

My stay in Berlin began on 9 May 2012 and ended on 22 July of the same year. During this time I pursued two main purposes: to take part in events and other activities offered by the Latin American Institute (LAI), and to carry on research at various libraries in the city.

The events at the LAI were very interesting for me. In addition to the Long Night of the Sciences on 2 July and the historical seminar, I particularly enjoyed the interdisciplinary colloquium. The exchanges there with other scholarship holders and professors on diverse research topics were very stimulating. I especially liked the rigorously guided discussions, which usually led to fruitful results. The many valuable suggestions made by participants from various academic fields proved to be enriching. These discussions gave me the unusual opportunity of getting into debates on subjects about which I knew very little.

I would also like to commend Berlin’s libraries and other cultural institutions with respect to research and writing. These are privileged places. Not only are the bibliographic resources excellent; the libraries also have generous opening hours and their quiet working environment and the availability of many technical devices make them outstanding places for scholarly study. Unfortunately, the library of the Ibero-American Institute (IAI) was undergoing renovations during my stay, which made access to some documents difficult and affected the general working conditions. Nevertheless, the holdings of the IAI were very helpful to me in completing my scholarly research, particularly my research on secondary sources that were unavailable in Mexican collections. Moreover, I was fortunate in having at my disposal the excellent services of the libraries of the Humboldt University (HU) and the Freie Universität (FU). The free book lending and free internet access made them both important places for my reading and writing.

On the whole, I achieved the goals set for my stay. Perhaps it would have been even more interesting had I been able to attend more LAI events and so been able to enjoy more exciting dialogues with other researchers. In any case, my stay in Berlin was for me an overall rewarding experience; it enabled me to broaden the horizon of my research questions and to get to know the dynamics of academic life in Germany in particular.

Kevin Niebauer, ‘Amazonia in the Campaigns of Environmental Organizations during the 1970/80s: spatial representations and their relevance to environmental debates’

Nino Vallen, ‘Chivalry and the Archive of Spatial Knowledge: The Construction of Political Identities in an Imaginary World’

The full programme of the Interdisciplinary Colloquium is also available here.

Information session for PhD students at the IRTG

For more information on our programme and activities, please consult our website: www.entre-espacios.de