The Global Financial Safety Net Tracker: Lessons for the COVID-19 Crisis from a New Interactive Dataset

The Institute for Latin American Studies of Freie Universität Berlin and the Global Economic Governance Initiative (GEGI) at the Global Development Policy Center of Boston University together with the United Nations Conference on Trade and Development (UNCTAD) present The Global Financial Safety Net (GFSN) tracker, an interactive tool to explore and visualize global financial agreements.

We also published a Policy Brief, based on the newest data of our GFSN tracker: Read the full Policy Brief 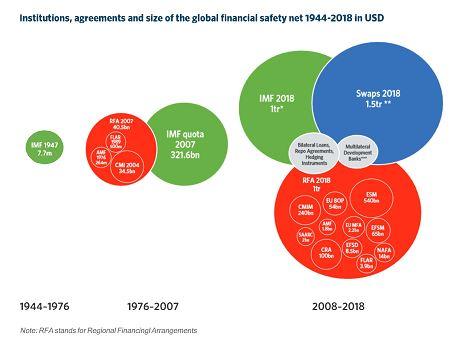 Here, we explore the utilization of the GFSN during the COVID-19 pandemic and its coverage, based on the most recent data we cover in the GFSN tracker. We find that newly created and reformed multilateral institutions on the global and the regional level – the IMF and regional liquidity funds have so far lent only a small share of their available lending capacity in reaction to COVID. While the RFAs have disbursed about $3.8 billion to member countries (less than 5% of their funds available), the IMF has lent about $108 billion (around 10 percent of its lending capacity). In the last decade, At the same time, we find that the third and less visible element of the GFSN, bilateral swap arrangements between central banks, has gained enormously in importance. Central bank currency swaps outpaced provided much larger volumes of crisis finance liquidity, with about $1.75 trillion accessible in bilateral central bank currency swaps as of March 2021. These swaps are offered by a wide range of central banks, predominantly the US Federal Reserve and the People’s Bank of China.

Thus, the amount of liquidity provision provided by bilateral currency swaps to prevent or backstop a financial crisis has outpaced that of multilateral institutions by far. Voluminous as they may be, bilateral swaps lack the predictability and transparency of multilateral lending and are not provided at a level playing field, but rather on the interests of economically powerful countries.

We take out three key lessons on the potential marginalization of the once fundamental multilateral elements of the GFSN.

First, despite pledges of rapid and abundant responses of liquidity from the IMF and the RFAs, these institutions have seen little use throughout the crisis. This could potentially be the calm before the storm: at the time of writing, many emerging market and developing economies have not lost access to capital markets due to a high market liquidity overall. This could change as debt levels continue to surge and if demand for liquidity resources grows, poorer countries and regions less covered by the GFSN will struggle to find the crisis financing needed.

Second, while RFAs and the IMF are multilateral institutions, the extent to which swaps have outpaced multilateral liquidity provision throughout the crisis raises questions about countries’ confidence in the capacity of these institutions to adequately respond to crises. Further, it raises the specter of national interests increasingly influencing the global crisis finance regime. While it is certainly premature to draw any conclusions about the GFSN, the authors suggest there may be increasing geostrategic considerations behind this vast volume of bilateral liquidity support, which might be described as ‘liquidity diplomacy.’ However, it is still too early to tell if bilateral currency swaps between central banks could crowd out multilateral liquidity provision by the IMF and RFAs.

Finally, multilateral institutions need to become more attractive to member countries to prevent their marginalization. Maintaining choice and competition in the system is important to encourage better service delivery and enhance the bargaining power of governments regarding programs to return nations to stability and sustainability. At the same time, inequalities in access to and availability of short-term financing point to the uncoordinated status quo of the GFSN.

In addition to the initial signs of cooperation between the IMF and RFAs, such efforts need to be systematically widened in scope to swiftly prepare for the next potential crisis after COVID-19. Additionally, reform is needed to IMF conditionality to regain utilization as a flexible, predictive and adequately conditioned crisis response mechanism besides regional and bilateral ones. In addition, safeguards must be put in place to ensure the RFAs not only benefit from collaboration with the IMF, but also maintain their autonomy and independence that is so highly valued by their member constituencies.